OUR ARRAY OF DJ EQUIPMENT 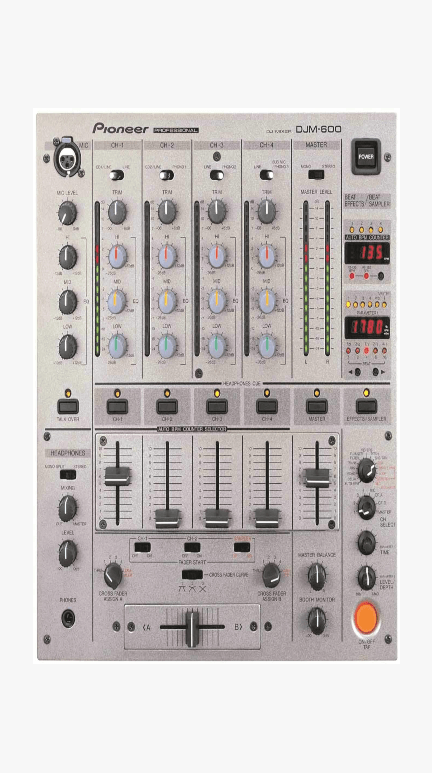 The Pioneer DJ Pro mixer DJM600 is a latest offering by the Japanese electronic giant. After the very successful predecessor (The Superstar DJM500) of this series, Pioneer has added some more new features on this mixer. For e.g. The Auto BPM Counter offers a lot more flexibility of use since in DJM 600 it measures t he range from 70-139 / 91-180 / 71-180 or even a Manual option. Another outstanding feature is the STRETCH LOOP PLAY, which can be adjusted to extend or shorten the sample from the mixed track. However, the sampling time is only 8 Secs which may look like a limitation to many DJs. Other basic but useful features includes an EQUALIZER, which has low/mid/high settings for each channel. AUTO BEAT SAMPLER is another function which is new for this series, however this feature was first introduced by Gemini in their PS series mixers. Also, the ABS record time is too short (only 6 Secs).There is no doubt replace the workaholic DJM 500 in clubs, but one thing to remember is that like DJM 500, this mixer works/used best if attached with Pioneer’s CDJ series Professional CD players. As always, the Pioneer quality is superb and it is built like robust equipment to handle all the hard use.
MANUAL 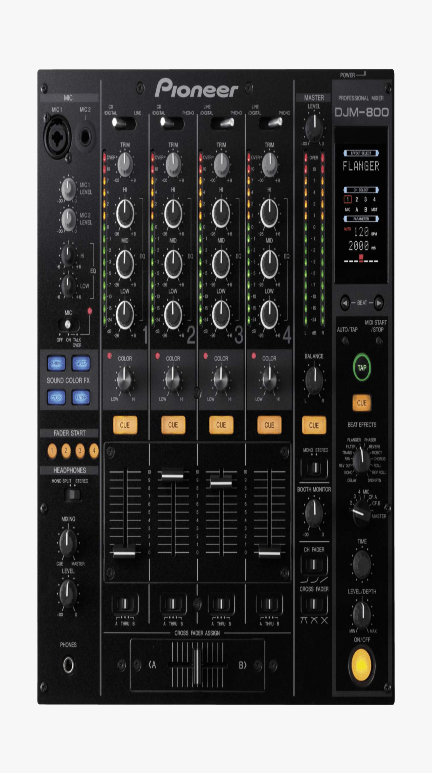 The DJM-800 mixer gives professional DJs the tool they need to expand their musical horizon, with capabilities for mixing records, remixing, producing and performing. Pioneer’s DJ mixers have a reputation for providing high quality audio and reliability. The new DJM-800 incorporates features recommended by many professional DJs and club engineers, raising the bar on sound fidelity and ease of mixer operation. Most important are its high quality 24bit/96kHz sampling and effect capabilities.

High Quality Audio
The analog signal from the player passes through the shortest signal route, first digitized at 24bit/96kHz through a pro A/D converter where it reaches the digital mixing stage with the best sound possible. The mixing is carried out by 32bit DSP with minimal deterioration of sound quality. A highly rigid chassis minimizes unnecessary vibration, which could adversely affect sound quality. The mixer also incorporates a dual-shield structure for eliminating entry of digital noise and a high performance power supply for noise-free power.
MANUAL

The DJM-900SRT is a multi-functional mixer that can accommodate various types of DJs including both traditional and Serato DJ software users, ideal for a single-DJ set-up in a venue. Additionally, Pioneer’s recently announced DDJ-SP1 sub-controller is a perfect companion to the DJM-900SRT to offer Serato DJ users with additional audio samples and effects for enhanced performances.

Designed especially for use with Serato® DJ software, the new mixer eliminates the need for an outboard sound card when used in conjunction with multiple players or turntables. In addition to compatibility with the software, the mixer inherits the same features offered by Pioneer’s highly acclaimed and industry standard DJM-900nexus mixer including onboard effects and high-performance components for intuitive operability and excellent sound quality.
MANUAL 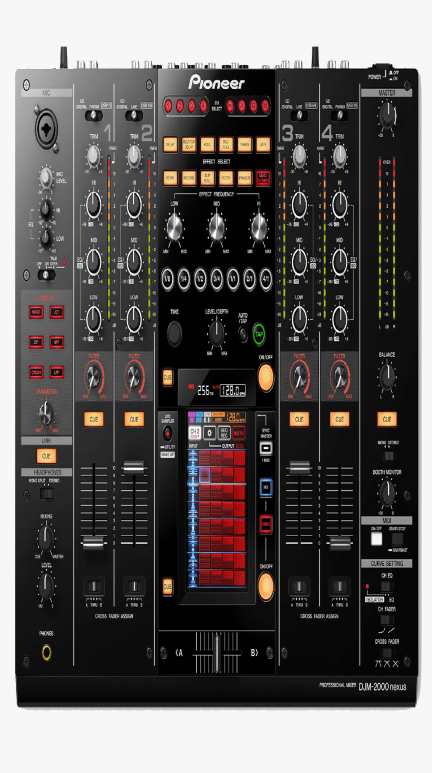 The DJM-2000 inherits a larger foot print than its predecessors to accommodate a sectioned layout of features as well as cosmetically match the latest Pioneer CDJ series of digital media players. On the top center section of the mixer resides its EFX capabilities to give DJs a bounty of digital effects. Located on each side of the middle section is its audio mixing controls for connection of up to four digital or USB sources. Across the middle section, Pioneer added new INST FX (Instant Instrument FX) functions which allow DJs to further alter and create more sound effects. And, at the bottom center of the mixer is a large LCD touch display that provides DJs a window for remixing beats and adding effects with the ease of a simple touch of the screen.

Industry First Multi-Touch Panel
A first in the industry for audio mixers, the DJM-2000 incorporates a full-color 5.8-inch LCD multi-touch panel for adding audio effects. Users can simultaneously manipulate the displayed controls on the panel by touching different areas of the screen.
MANUAL 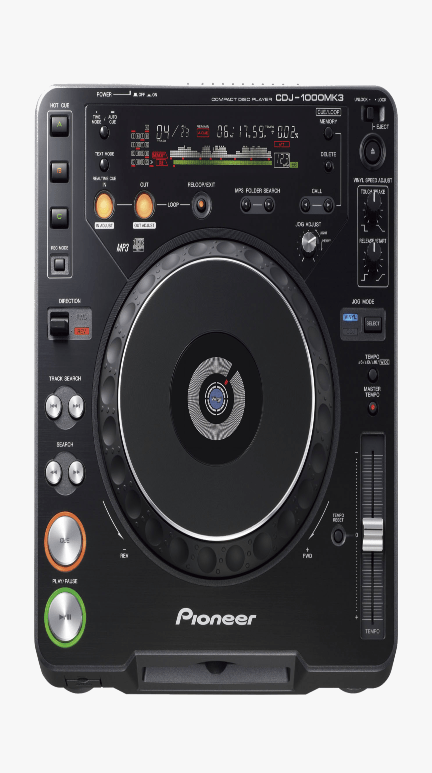 If you want be taken seriously as a professional DJ you’re going to need the skills, obviously, but you’re also going to need the gear to match. No matter where your music-destiny takes you, the Pioneer CDJ-1000MK3 is up to the task. Since its introduction in 2001, Pioneer’s flagship CDJ has been used so often by so many of the world’s top DJs that the name “CDJ-1000” has almost become shorthand for “CD deck.” When you show up to your next gig with a pair of CDJ-1000MK3’s in tow, everyone will know you mean business.

Beyond pure name recognition, the CDJ-1000MK3 has the features, effects and fidelity that’ll get your skills noticed. Any CD player can play music, but to call this deck a “CD Player” would be an insult. The CDJ-1000MK3 is more an instrument than a mere implement, and no matter whether you’re used to CD decks or vinyl turntables, the intuitive layout and responsive feel will be instantly familiar. 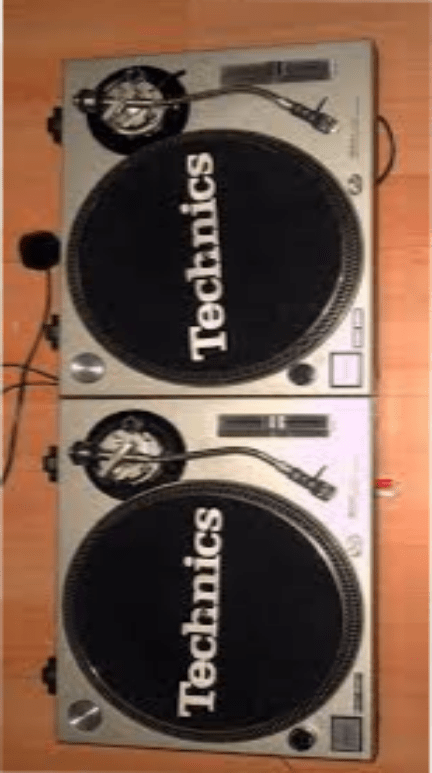 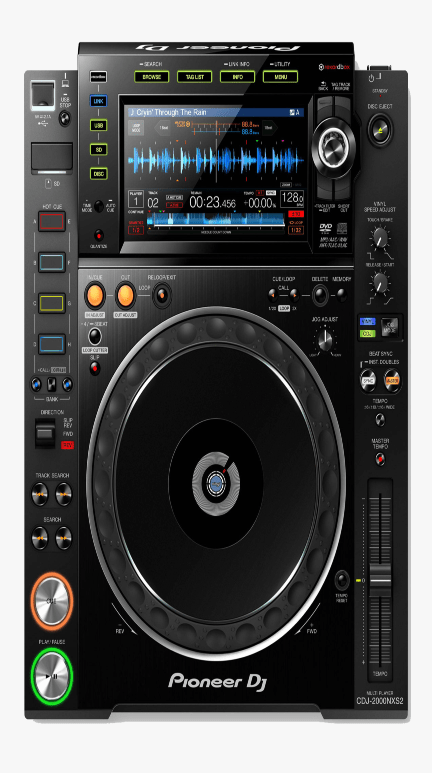 Adapting to today’s variety of media formats, the CDJ-2000 enables playback of MP3, AAC, WAV and AIFF audio files from CDs and USB memory devices, and from DVDs and SD cards as well on the CDJ-2000. A USB port located on top of the turntable enables users to quickly connect an external storage device such as a Tonium Pacemaker™ or a hard drive packed with music files, minimizing the need to bring a laptop computer to performances.

The CDJ-2000 turntable includes rekordbox™, Pioneer’s proprietary music management software that organizes and catalogs a DJ’s entire music library. When music files are imported to rekordbox, the software analyzes each file and prepares them for use specifically with the new CDJ turntable. Key elements of Pioneer’s rekordbox software:
MANUAL 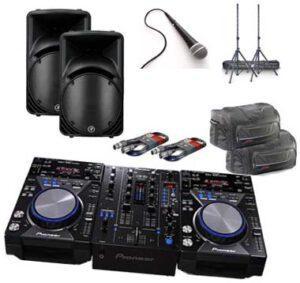 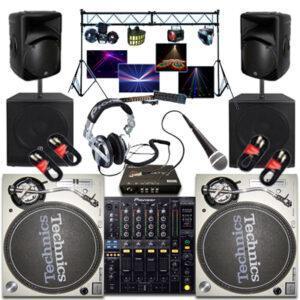 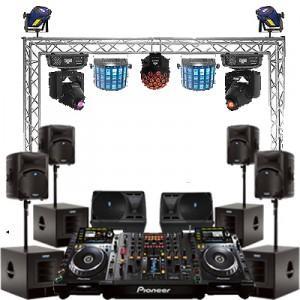 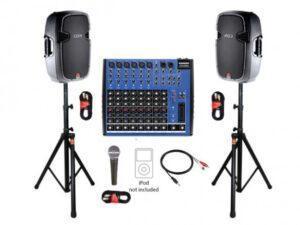 iPloy Sound System with DJ Speakers Rental NYC
Rent this iPod Sound System for a variety of events such as weddings, birthdays, work parties.
This exclusive JBL product is an all-in-one sound system rental NYC that provides a microphone for announcements and speeches and also allow music to be played using an iPod, iPad or computer. While this iPlay Sound System is easy-to-use and portable; it is thoroughly professional.
2 JBL Speakers
2 Speakers Stands
1 Audio Mixer
1 Microphone
3 XLR Cables
Request A Quote 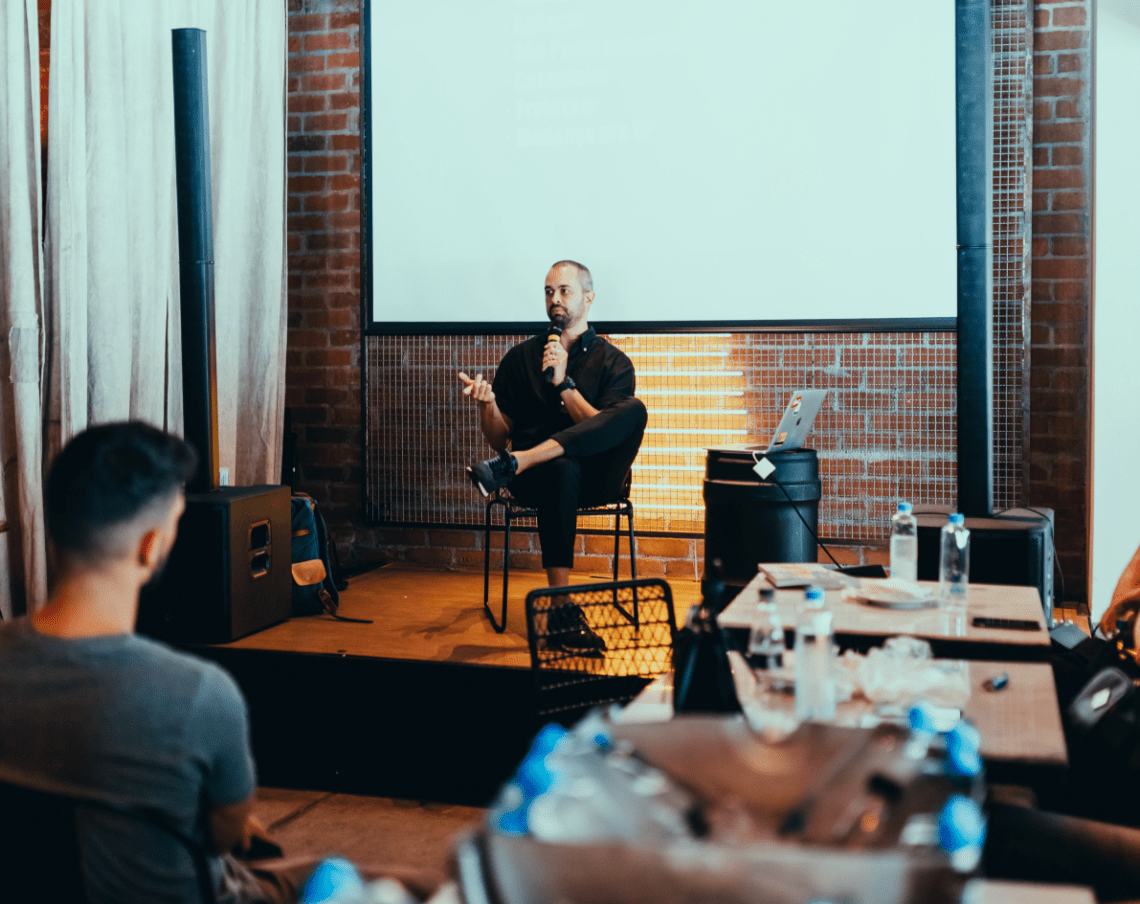 We are your event technology partner. Any company can rent you equipment. It’s our mission to be your full-service event production solution. From equipment rentals to complete event services including delivery, set-up, and system operations, IVS is New York’s audio visual equipment rental choice for meetings, presentations, conferences, board meetings, activations, and special events.
More About Us

Remember a sound system rental with audible sound makes an event. Let us be your sound system rental service of choice in NYC. Simply fill out the form with event details and we will respond quickly with information on providing audio equipment, AV engineers and technicians, and professional DJs for your next event.